An e-dialogue with Elisa Ludwig and book giveaway

I'm excited to introduce you to Elisa Ludwig, an upcoming debut novelist of Pretty Crooked, and co-blogger on the brand new YA/MG mystery blog, Sleuths, Spies & Alibis. When she's not plotting fictional mayhem, Elisa writes about food for a daily paper in Philadelphia. As someone who used to write about local eats for a Seattle-area paper, I can tell you food writing is a sweet gig. (pun intended) Not great for the waist line but super-de-duper for snagging a great table...and the desserts are *must say it* usually to die for.

Elisa's mystery comes out in March (obviously a HUGE month for debuts!), joining an e-book, June of Rock. She's experienced traditional and epub in one year, giving her lots of insight in our ever changing publishing world. Two cool things about her right off the bat: she went to high school with Bradley Cooper (drooolll); AND she snagged a professional film crew to shoot the book trailer for her mystery. Check out her blog to get the deets on that adventure.

Speaking of deets, read below for a chance to win a free book!

1. Your debut, Pretty Crooked, comes out in March. Tell us a little about your publishing journey - how you landed your agent and the process of going on sub.


I landed my agent, Leigh Feldman, for June of Rock back in 2009. We submitted that book for about a year. The feedback was good, but almost every editor agreed that it was "too quiet." The last editor we submitted it to was Claudia Gabel, who, based on that book, offered me the opportunity to write the Pretty Crooked series. So it was an unconventional story, but as a good writer friend told me, things never happen the way you think they will, and that's for the best!

2. You published epubbed June of Rock. Why did you decide to go this route with this story? 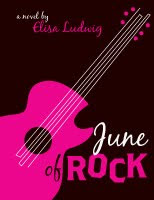 June of Rock just didn't hit with traditional publishers but both my agent and I still felt it was good enough to send out into the world, so I decided to try the ebook route to see if I could connect with readers that way.

3. Describe the surprising ways the ebook process has been different than traditional publishing.
For me, the ebook is somewhat of an experiment, but I felt that with my official debut coming out, it would be good to get it out there and see what happens. It has been a more vulnerable experience in the sense that it's just me, with no team of people behind it. On the other hand, it has been very laid back, because I'm not putting too much pressure on myself. In the end I will devote much more time to marketing Pretty Crooked. I'd love for June to find readers and I am just sort of trusting that it will, one way or another.

4. What are your favorite promotional tools for your ebook?
So far, it's been bloggers! A few of them stumbled on the book on their own and I sent a few copies to others to review. The response has been amazing. I really think bloggers are the most generous people ever!

5. You're a journalist too! You get to write about food which, back when I was an A&E writer in Seattle, was one of my favorite gigs. Talk about that - are you a critic, a foodie or report the trends?
I used to be a critic and I would review restaurants in Philly but I gave that up about three years ago—I was tired of being the messenger for bad news all the time and it was starting to become increasingly difficult to stay healthy with so many meals out. These days I write features on food trends, nutrition issues and I test a lot of recipes. I love food writing, and I someday hope to integrate it with my YA writing—just not sure how yet.

6. Where do you find the energy to write fiction after working at nonfiction all day? Or how do you stay creative?
Good question! It can be challenging. Since I got a contract and have gone professional with the fiction side of things, I try to put in my hours drafting my manuscripts early in the day when I'm the most energetic (and the least self-critical). Then I block out time for for my other work, according to deadlines. On weekends and some evenings I will work on edits. The energy issue is probably why it has taken me as long as it has to break into publishing, but on the other hand, I think having to write on deadline all of those years has made me much less precious about my writing and much more disciplined. I don't do anything in particular to stay creative except try to take in as much reading, film, music, art, etc. as I can in my day-to-day life.

7. You've written both YA contemp. and mystery. In your experience, is plotting for mystery different than for other genres?

Considering I was a full-on pantser before I wrote Pretty Crooked, yes! But Pretty Crooked and its sequel Pretty Sly, which I'm working on now, fall somewhere in between the contemporary and mystery genres, so I would say that it's not all that different ultimately. You still need to think through all the possibilities, you still need to create drama and raise the stakes and parcel out information very selectively.

8. Talk about the formation of Sleuths, Spies & Alibis. How did you all meet? And what was the reason for starting this YA/MG mystery blog?
Most of us met in the Apocalypsies, the group of childrens' authors who will be debuting in 2012. The blog was Diana Renn's brainchild, so she would have to give you more of the specific insight into how she decided to start it. But the general idea was that there really wasn't much like it out there, and we wanted to provide resources to readers, writers and educators.

9. How often will you be posting on that blog?
Right now, about once a month on open topics, but contributing regularly to our ongoing features like DNA and Mystery Mondays.

10. Any fun posts/contests coming up you'd like to share?
We just had a giveaway for readers to guess our first Interrogation Room (interview) Suspect (author), and I think that contest will be ongoing with future interviews.

Your favorite candy.
Aero bars, but I never see them in the States!


Age when you got your first kiss.
12

Best song on your playlist.
Right now, I'm really into "Bizness" by tUnE-yArDs.


Fictional hero after whom you lust most.
Drawing a blank! I tend to like my lust objects in three dimensions.

What?! No Mr. Darcy or Rhett Butler (dating myself here) or Aragorn or Luke Skywalker...*minor hyperventilation followed by chocolate intake*

And to increase her awesome quotient, she's giving away, Don't Murder Your Mystery, a helpful handbook for anyone who wants to avoid WIP death. Comment below with your email to have your name added to Melvin the Magic Sorting Hat.
Posted by Melodie Wright at 9:47 PM

Thanks! sarahbelliston (at) gmail (dot) com

Thanks for introducing us to Elisa. The funniest part though was your comment about dating yourself by mentioning Rhett Butler. I'm gonna take a wild guess that you weren't around when he was first unleashed onto the world :-)

Another great interview! :) I loved the questions. :)

What a fun/informative interview! Pretty Crooked and June of Rock both sound great, and it was interesting to hear a little about epubbing while going through the traditional process as well. Thanks for telling us about the the YA/MG mystery blog~ I'm heading over there now!

Thanks for stopping by all!

It's always interesting to hear the story behind the published book. Thanks so much telling yours here.

Melodie Wright
I'm the girl in the back of the room with her nose buried in a book.

One of the most amazing Christians I know...